Introduction to Macros and Conditional Assembly

In the Video Course for IBM Assembler section, I’ve added an introductory lesson on Conditional Assembly and Macro Processing. If you haven’t written macros or want to learn something about conditional assembly instructions, this guide will get you started. There’s also a link to the Powerpoint that goes along with the video.

What you can learn from the Cobol compiler about Assembly language

It can be fun to take a look at the assembly language listing of a Cobol program. Geeky, admittedly, but still fun. If you have never given the listings much thought, take a look at this video. You might be surprised what the Cobol compiler gets up to, and what you can learn about Cobol and assembler. In this video I examine whether to COMPUTE or not to COMPUTE, whether to PERFORM or to PERFORM THRU, and what happens when you tell the optimizer to give it the old college try.

It’s worse than he thought

Cobol has been in the news lately since the NJ governor asked for help with some legacy systems.  Perhaps someone should tell him it’s worse than he thought – he’s going to need some assembler programmers, too. 🙂

Some of the recent discussion of Cobol by people who should know better is amusing if it weren’t also disappointing.  You would think that Cobol died in the 1970s.  The fact is, IBM’s Cobol compiler is quite sophisticated, as is the language.  This isn’t your father’s or mother’s Cobol. It is a truly modern language, even object-oriented if you want it to be. On the other hand, writing business systems in Java, C, Python, Ruby, etc.  represents a challenge I would not like to tackle (even though I love those languages).  In many ways those languages are ill-suited to the task – for example, just doing business arithmetic in Java requires some really ugly code.

But what do I know? I still think assembler is fun to write.

One thing’s for sure: It will be fun to hear the forensics of what happened with the governor’s legacy systems. I’m guessing it has little to do with any shortcomings in Cobol.

In the last post I suggested we take the challenge that John Ehrman posed in problem 41.7.1 of his well-known and used assembler book:

David Staudacher contributed a number of interesting ways to abend, but I especially liked BCTR R15,R15 for a protection exception. Melvyn Maltz had some interesting comments about the whole issue and suggested he gets S0C5s whenever he uses a bad index into a branch table. You can see all their contributions in the comments on the last article.

I was surprised (after posting) to discover that John himself had already weighed in on this challenge in the Solutions part of his book. Here is what he published (page 1275 of his book):

41.7.1. Some possible but unverified instruction sequences are:

I tried running the code above and found an assembly error on (02). John said the code suggestions were unverified! Still he was on the right track. LPSW is a type S instruction and expects a simple base/displacement address, so LPSW 0(8) will generate the error he intended.

The only problem in the list was his suggestion for (05) which generated an S0C6 for me instead of the S0C5 we require.

So how do we get a S0C5 exception to occur? I’ve tried a number of bad branches – protection errors every one. After reading the Principles of Operation, I’m wondering if a garden-variety programmer can easily get a S0C5? I hope one of you will prove me wrong. Send me the code that generates a S0C5!

Help Me Write The Worst Program Ever

I never got to meet John Erhman but we corresponded a little.  He was kind enough to get me included on the program at a Share conference in Anaheim.  John wrote an excellent Assembler reference titled  Assembler Language Programming for IBM z System Servers . Even a seasoned assembler programmer can learn a lot from this book – it’s packed with many interesting assembler goodies. I keep a link to it nearby and you should, too. I was browsing through it today and came across a suggestion he had for a program to write:

The program suggestion comes after a section of the book that covers how to handle program interruptions using ESPIE. It wasn’t too hard to get a basic version of the program going. You do have to write some “bad” code to generate the 15 possible program interruptions. As I began to write this code, it struck me as funny that this would be the worst program ever. That’s when I thought it would be fun to enlist your help. Many of the interruptions are easy to generate – we’ve all sinned. But I did scratch my head on how to generate a S0C5. I can’t remember ever getting that interruption, but then my memory isn’t as good as it used to be.

Here’s how you can help: If you have a favorite way to generate one of the 15 possible program interrupts in just a few lines (the fewer the better) send it in. I’ll pick the ones I like best and include them in my program and give you credit. The program will appear in a future post or article on recovering from program interrupts. The program I’m writing does have an input file (FILEIN) and an output file (FILEOUT). That might help you with some of the interrupts. Be sure to include the definitions of any fields you need. As a small tribute to John, we’ll commit every possible error. Help me write the worst program ever!

Study Assembler On-line with Me at Marist University – Starting Fall

If you would like to pursue on-line assembler training with me starting Fall, 2019, check out the Marist University IDCP program here:  http://idcp.marist.edu/enterprisesystemseducation/zosprogramoverview.html

I have been away from the website for quite a while, but I’m trying to get back to it again.  Over the past year, I’ve been busy writing a novel (mystery), and I also added a second grandson this year. And of course, there’s golf to play.

If you are looking for online assembler training or other z/OS training, you might consider the Marist College Institute for Data Center Professionals (IDCP) program.  The program starts in late August and there will be an online assembler course starting in December. I have taught the assembler course over the last few years.  They have also added a security certificate. Here is a link to the Marist site:  Marist IDCP

I cut the following graphic from their latest blurb which describes the programs they offer. 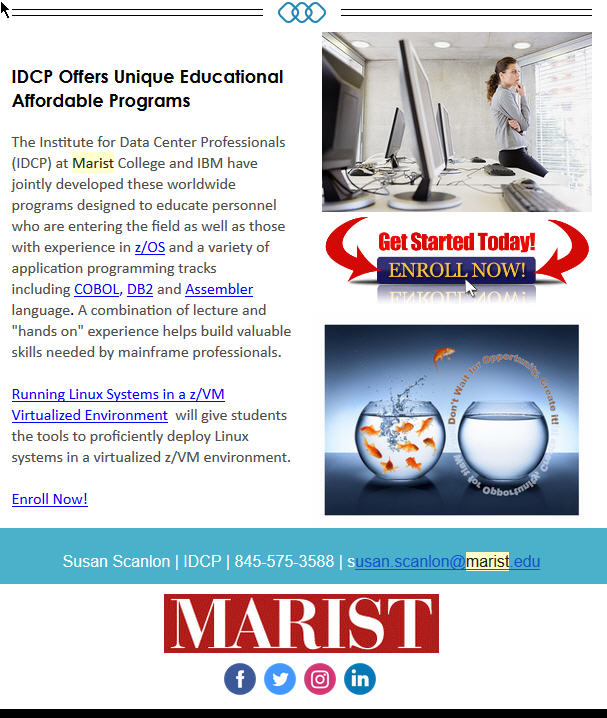 Instruction of the Day: SPM

Are you catching all the overflows that occur when you perform packed decimal arithmetic? Not sure? Read about the Set Program Mask instruction (SPM) that controls how decimal overflows (as well as a few others) are handled inside your program. Learn all about it here.

Instruction of the Day: CRB

Learn one new instruction today – Compare and Branch – CRB.  You can tighten your code just a bit with CRB, an instruction that combines a comparison operation on two registers with a branch operation – all in one line.  It comes with some extended mnemonics that make it easy to use.  Learn all about it here in the time it takes to finish a cup of coffee.

I envisioned VisibleZ as a teaching tool for assembly language – I wanted to force students to deal with object code as a way to learn the assembly language. With VisibleZ, after writing a few bytes of object code, you can watch the effects of a given instruction on the state of the machine, and in the process learn a thing or two.  Or, you can simply step through the hundreds of pre-written program snippets that comes with it.  I’ve tried to make it easy to write program snippets – two hex characters represent a byte, with bytes separated by spaces – all in a text file. No need to write a large program to get some experience with an instruction.

A few months ago, James Cray, one of the contributors to  z390, the Portable Assembler and Emulator Project , suggested it would be nice to be able to load z390 object modules into VisibleZ.  If you’re not familiar with that project, and you don’t have access to a mainframe, you should check it out.  Using z390 you can write large, well-developed assembler programs and run them on your pc.  It also supports Cobol and CICS!

I didn’t want to want to change my original file format, but I decided to take James’ advice by providing some support for z390.  I’ve just posted an experimental version (executable jar / codes.zip -code snippets) of VisibleZ that will take the assembler listings produced by z390 and scrape off the object code and format it it to run in VisibleZ.  You will have to install z390 separately and tell VisibleZ where it lives on your machine.  After that you can assemble a program and run your program, all within VisibleZ.

The experimental version runs on Windows only.  If there is any interest in getting this to run on Linux, let me know.  I’ll remind you that VisibleZ still has limited support for QSAM files – 80 byte records and a limit of three input and three output files.

The Punctilious Programmer
Blog at WordPress.com.